1. Island Park was formed in 1841 by Jonas Williams’ raceway which diverted water to power his grist mill on the other side of Main Street. You can see the raceway door on the north bank which is still used today by the mill to grind wheat. The large park is a great place to relax, have a family picnic or go swimming.

2. Proceed west through the parking lot to Cayuga Street, turn left. 72 South Cayuga Street. The “old stone schoolhouse,” as it is affectionately known, built in 1840 on land donated by one of the area’s earliest and most prominent residents, Timothy S. Hopkins. The one-room school educated children from all around.

3. Walk west on Milton Street. Calvary Episcopal Church (1897) first rectory was re-erected in 1949 at 19 Milton Street, across from the site of the church.

4. Corner of Milton Street and Los Robles St., Sts. Theodore Orthodox Church was the original site of Calvary Episcopal Church, now located at Cayuga and Milton. It was built in 1924 on land donated by George Beck. From 1952 it belonged to the Unitarian Universalist Church, and since 1963 it has been the site of Sts. Theodore Orthodox Church, which since 1968 has been a parish of the Russian Orthodox Church Abroad. Since its inception it has been an English-language parish. The rectory was built in 1999.

5. Proceed to the end of Milton Street, go through the Village Park to Long Street, on your left is the Lehigh Valley Railroad Williamsville Depot. This picturesque railroad station was built in 1896. Providing travel to Buffalo, soon the train service switched to a freight terminal. The Western NY Railway Historical Society purchased the building in 1990 and is restoring the station.

6. Proceed on North Long Street, turn right on Main Street. The Williamsville Cemetery on Main Street (1810) is the resting ground for hundreds of village residents. Stroll through and read history from the start of the Village.

7. SS.Peter and Paul Roman Catholic Church, 5480 Main Street. The towering stone church, long a prominent beacon on the village horizon, has the distinction as serving as the second oldest parish in the Diocese of Buffalo. St. John Neumann, consecrated fourth Bishop of Philadelphia in 1852 and canonized a saint by the Roman Catholic Church in 1977, served the young parish which stretched from Kenmore to Batavia. This historical church was built in 1863. Remains of the original 1866 stained glass windows, which were replaced in the early 1900’s, may still be seen in the sacristy.

9. 5548 Main Street (1854). The three-story red brick building was erected in 1854, shortly after purchase of the lot by Timothy A. Hopkins. The “Hopkins Block” or “Brick Building,” as it was called, was for many years the tallest commercial building in Amherst. Originally a carriage shop, it has subsequently housed a school room; E.H. Smith’s general store; Bill Measer’s grocery store; Howard G. Britting’s general store specializing in jewelry, school supplies, cigars and candy; Clara Walter’s Village Shoppe, later Bancroft’s Village Shop; and more recently, haberdashers, Roneker’s Mens and Boys Wear and R.J. Wells, Co. Early in this century the telephone switchboard for Amherst’s 40 telephones and the Village Post Office were also located in the building. Presently Marty’s Formal Wear is the owner of the building.

10. The Amherst Bee, 5564 Main Street (1915). No tour would be complete without mention of the Amherst Bee, a Village institution nearly as old as the community itself. The weekly Amherst Bee, in continuous publication since its first four-page issue left the hand press March 27, 1879, has long been regarded as the official newspaper for both the Village of Williamsville and the Town of Amherst. For more than a century, its pages have recorded a colorful account of the people, places, and events which define our local history.

Early Bees, displaying a masthead picturing bees swarming around a beehive and the motto, “So doth the busy bee improve each golden hour,” featured stories, national and local news, a railroad guide and timetable, Buffalo market reports for area farmers, and auction bills in both German and English.
The first offices of the newspaper were located on the south side of Main Street near Cayuga Road, close to the home of its first publisher, Adam Rinewalt. Increasing circulation and the addition of a horse-drawn press prompted a move to new quarters at the corner of Main and North Cayuga. The offices and press were relocated twice more before being moved to the present location in 1941.
Since acquiring the business in 1907, the Measer family and the Bee have been synonymous. Publishers, George Measer, and his son, Trey, and Trey’s sons Michael and Rob now the fourth generation of the family continue to carry on the long-standing Village tradition. A complete record of the paper, which has received much acclaim for its service to the community and pioneering efforts in the trade, is on microfilm at the Williamsville branch library.

12. Eagle House Restaurant, 5578 Main Street (1832) built by pioneer, Oziel Smith, it has been in continuous service for over 150 years as an inn, stage coach stop, tavern and boasts of holding the oldest hotel license in the state. The Eagle House is one of the most celebrated landmarks in the area. There is a cellar and passageway leading from the back of the building under the driveway to Glen Park. This may have been part of the Underground Railroad.

13. Williamsville Water Mill (1811), 56 Spring Street. The water mill stands as a stately silhouette on the banks of Ellicott Creek, a monument to the hope and struggles of the community’s earliest settlers. One of several mills built by Jonas Williams, the water mill or west mill, has been in continuous operation since 1811. The mill has a long tradition carried on by the Cadmus family. Stop in their mill and tour the historic site first hand.

14. Walk back to Main Street, turn left to Glen Park entrance, proceed down the path to Glen Park and the falls. Beautiful Glen Park with its picturesque park like setting and rugged stone walls is the setting from which to view the spectacular water falls, the envy of all parks. The site of the famous Harry Altman’s Glen Park Casino and Amusement Park is now a splendid place to enjoy a picnic, fishing, hiking or just the scenic views of nature.

15. Walking through Glen Park look to the other bank near the falls. Dodge Mill Foundations can be seen. The stone foundations of Jonas Williams’ east mill, more popularly known as the Dodge Mill, can barely be discerned. The mill was first powered directly by the falls and later by a dam and raceway, now the main channel of Ellicott Creek. After several changes in ownership, the east grist mill was purchased in 1864 by Henry Dodge, who converted from a stone-ground process to a roller process. A fire in 1894 destroyed this famous landmark and killed Mr. Dodge, who fought in vain to save his business.

16. Proceed out of Glen Park on Glen Ave. walk east to Mill Street, turn right toward Main Street. 42 Mill Street (1820) this house was a trading post and an inn used by Indians and settlers. The tunnels under the home may have been used as part of the Underground Railroad.

Not on the map, but east on Eagle Street is the St. Paul’s Lutheran Church (1900). Also a part of Jonas Williams’ original tract of land, this parcel has been under church ownership since the Society of Disciples of Christ built a small chapel on the site in 1839. When they moved to a new church on Main Street in 1870, the Evangelical Lutheran Congregation of St. Paul purchased the property. They met in the original 1839 building until 1900 when the charming Gothic-style church was built on the foundations of the early chapel. Prior to 1907 all services of this congregation were conducted in German.

17. Meeting House Church (1871), 5658 Main Street. In 1871 the Society for the Disciples of Christ dedicated their new red brick church. The Village purchased the church and named it the Williamsville Meeting House. Major renovations were made in the church by the Williamsville Historical Society and the Village. The new bell tower was one of the major accomplishments which was dedicated March 1997. By returning the church to its historical past, the Society is applying for State and National Registry of Historic Sites. Stop in for a history lesson. Cross the street here at Main and Mill Streets.

18. The Evans House (1799), 5641 Main St. in front of Ed Young’s Hardware store. All that remains of the first home built in Williamsville is the marker placed here. The two -story log structure was built by the Holland Land Company. The home was so large (seven rooms, two fireplaces and a large garret) that it was used as an inn. It was demolished in 1955.

Not on the map, but east on Main Street is the Williamsville Methodist Church. It was first a schoolhouse built in 1821, on the Iroquois Trail (Main Street). In 1821 the first Methodist group met in homes and in General Hopkins’ barn. In 1834 the “First Society of the Methodist Episcopal Church” was organized.

19. Ellicott Creek was once called the Eleven Mile Creek. At one time it was a narrow raceway serving the many mills on the creek. In the 1930’s it was made larger and a dam was built to help control flooding. This creek has played a great part in the history of Williamsville. 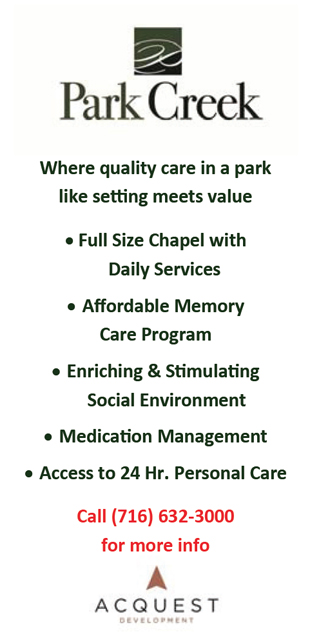